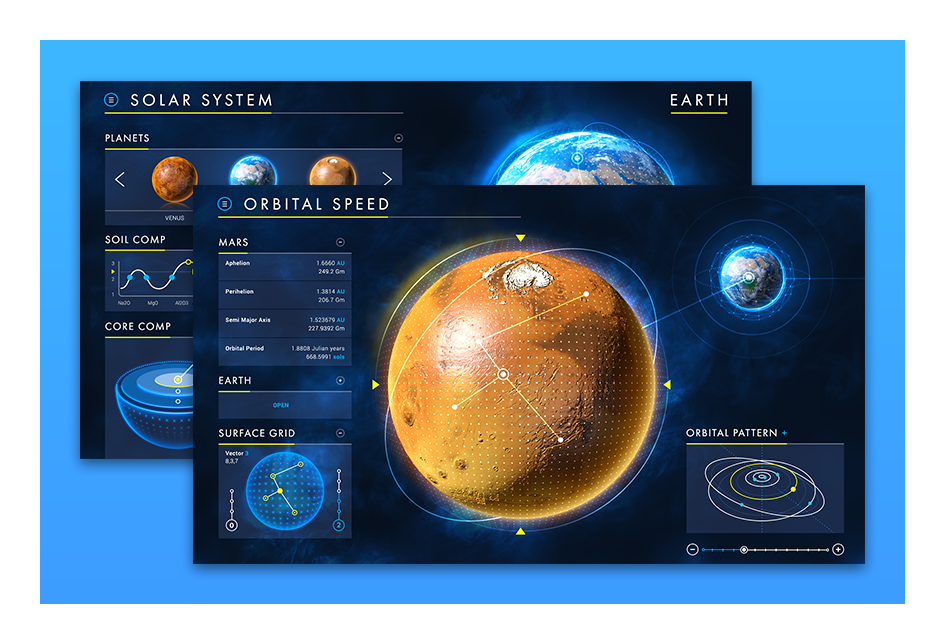 This Planetary visual design concept was a small internal based project focused on showcasing the video and interaction capabilities of the ViewPoint kiosk. The requirements included full screen 1920×1080 video, image sequence animations, 3D models and a visually striking user interface. This was meant to be a marketing showpiece in a show real so specific features and the ux were not the sole focus.

Space and specifically Mars have been focused upon in the media. Nasa, SpaceX and government officials have been focusing on the mission to mars program and what that means for our current generation and the future generations to come. Exploring our solar system and planets like Mars is incredibly important. After coming up with this initial idea I created a visual design inspired by technology and space travel, modeled/textured four separate planets and brought them to life through key framing their rotations.

This internal marketing project had a short deadline and did not allow for much iteration or testing. Due to the time constraints I was only able to create a few different screens which meant that each screen needed to convey interesting and visually stunning ui elements. A small selection of elements and interactions were defined and animated because of the limited timeline.

The design’s focused was centered around a user being greeted with a login screen for the fictitious application. Once the user entered in their credentials a home screen would present earth as the default planet selected. After reviewing the information the user would select Mars and analyse the orbital speed, patterns and surface area. Most of the allotted time was spent on defining the final visual design, 3D models and motion graphics. I created a working prototype using ViewPoint that would allow the marketing team to video someone walk through the different screens and selections.