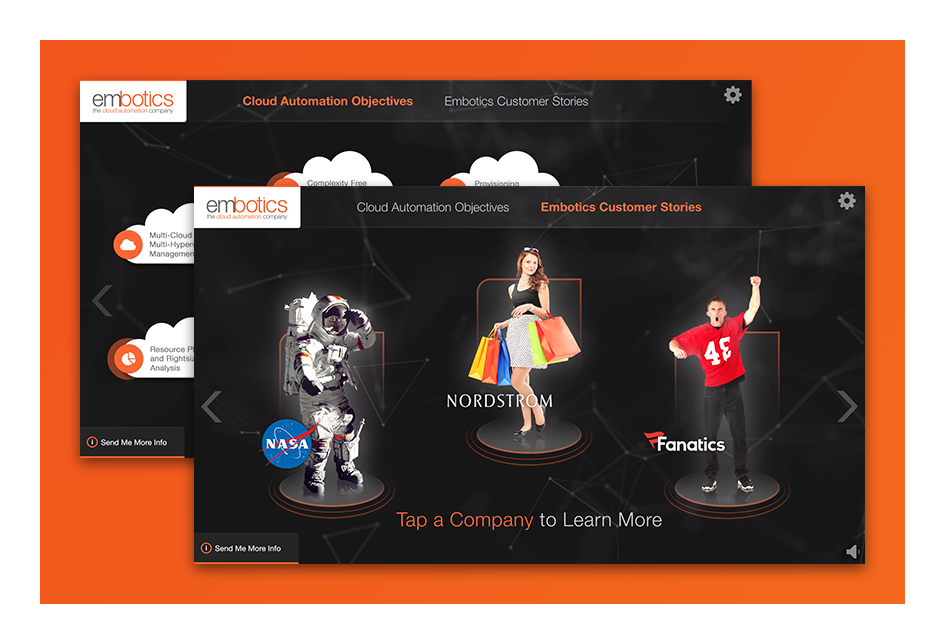 Embotics was interested in marketing their cloud management platform and services on a large touchscreen device that would be demoed at tradeshows. They wanted a design that communicated their product’s story and how their services have integrated into their current client’s business needs. Capturing potential consumer contact information and general data within the system was requested. Custom content including animations and general graphics that followed their brand identity formatted for a large touchscreen display needed to be created. The visual design and interactions were two very important aspects of this public facing project.

I worked alongside another designer interviewing the client and stakeholders, creating the information architecture and delivering the final visual designs including motion graphics. I presented the initial IA and two conceptual visual designs to the client. After several rounds of feedback and iteration the framework and visual design were agreed upon. From there I worked on the idle animation and two initial screens creating the assets and implements them into the the proprietary visual editor used for this project. The client and several other designers continued to test the application throughout the project providing valuable feedback which I documented and included if deemed appropriate and inline with the project goals.

How do you not only attract but engage and connect with potential customers on a trade show floor? Embotics needed a design solution that cut through the trade show noise. Although there would be sales representatives inside the booth to walk people through the experiences we still needed to explore the edge cases that included users beginning the experience without a representative present and users walking away from the touchscreen without completing the experience.

We wanted to keep the experience simple and focused on the initial key points Embotics was interested in. The design was based around two main screens, the first screen presented the user with eight commonly asked questions centered around cloud automation and how the service could be integrated into their business. The second screen revealed three popular companies and their success stories using Embotics’ service. A universal button was placed in the bottom left corner allowing the user to request additional information at any point during the experience. The custom design work and content was all based off of the Embotics brand guidelines. The assets and motion graphics I created included the visual design, animated background, NASA Astronaut, Nordstrom shopper, Fanatics sports fan character animations and cloud pinging hotspots.

Ship It! Racing Based Trivia Game